11 Jun Back from the Khutzeymateen

Posted at 07:52h in Photo Tours by Terri Shaddick
Share

I am back after enjoying nine peaceful and calm days among the Grizzly Bears of the Khutzeymateen, joined by two different groups of eager photographers.

This Blog Post is later than I had planned it to be, I’ve been home for over a week now, but I took so many photos, that I wanted the chance to actually edit some, and do an overall review of the images, before making a post about my experience. 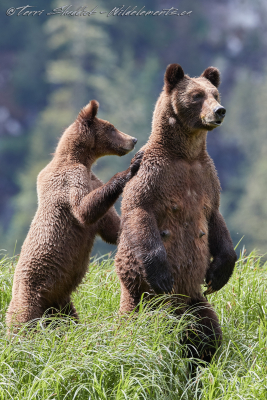 I would say the theme of the 2019 trip to the Khtuzeymateen during my nine days was “calm”.  After leaving the hustle and bustle of the city, you are presented by an overall calmness and tranquility of the Khutzeymateen Estuary.  This was combined with the fact that the bears that we were seeing over the nine days tended to be calm bears.   What do I mean by this?  Well there really was not any big large males roaming around the estuary or inlet (until the last day) therefore all the bears kind of had their place and stuck to it, with no one pushing anyone else around.

When photographing the bears, which included three different moms with cubs, we had a lot of opportunities to watch them calmly go about their day, which included eating, pooping, and if we were lucky, taking a nap on a pretty log, stump or rock close by.  Having three moms with cubs for much the nine days allowed us to capture various interactions between them, including the mom standing, with the cub standing behind her with his hand on her back which I titled “Let me See“.  We also had the chance to photograph one of the moms napping her cub, and the cub cuddling up next to his mom.

On the last day was when the dynamic started to change, and there was a bit of a buzz in the air in the Estuary.  It started off with one of the moms with cubs that we had been watching seeming like she was a little edgy.  She kept watching into the Estuary and seemed to be a bit more cautious than normal. It was not long before her and her cubs ran off into the forest.  Shortly afterwards, a male came roaming down the shoreline, focused on smelling around for the mom and her cubs.  The anxiety among the bears continued further in the estuary when there was another large male bear lurking in the tree-line while a mother and her cub fed, and he subsequently ended up chasing them away. If you had only attended the last day of the trip, you would not have believed how calm the other eight days were.  There were a few more males further down the inlet as well, but there were less smaller bears and no cubs down there (that we had seen), so their presences seemed to have less of an impact. 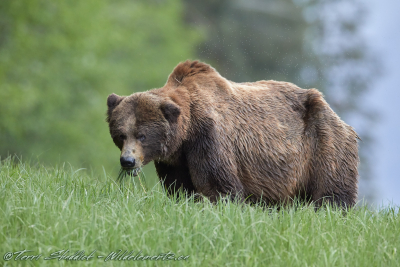 Back from the Dead

We capped the trip off by seeing a bear that was assumed to have been dead, “Brutus”.  He was first spotted further down the inlet earlier in the season, and then started hanging around in one of the creeks closer to the Estuary.  When we actually laid eyes on him ourselves, we were surprised that it was him, “Back from the Dead“.  For many, many years Brutus controlled the estuary, and now he is over 30 years old.  So when he disappeared a couple of years ago, everyone had just assumed that he had passed away, it was really surprise that he was still alive, and relatively healthy, given his age, although not nearly as big as he once was.

The calmness of the bears also provided me with the opportunity to try out various pieces of camera equipment that I brought along. I was able to try different body/lens combinations, try out my new EOS R, the new 400 f/2.8L IS III lens, including with various teleconverters, and even brought along my 70-200 f/2.8L IS III lens which got more use than I had expected.  Stay tuned to future blog posts on my thoughts on the performance of both the 400, and EOS R in the “real world” (or at least the real world where I do the majority of my photography).

There is now one spot available for 2020 Khutzeymateen instructional photo tour, and the 2021 priority booking list continues to grow, so if you are interested in having the opportunity to visit this pristine estuary yourself, please send me an email contact@wildelements.ca for more information.