18 Oct Back from the Great Bear Rainforest

Posted at 20:51h in Photo Tours by Terri Shaddick
Share

I got back from the Great Bear Rainforest just under a week ago and I am still fully digesting the trip, and going through the many, many, photos.  Receiving my Canon EOS R as soon as I got back has somewhat thrown a wrench into my time behind the computer…but more about that later.

One of the reasons that I continue to love going back to the Great Bear Rainforest, is that you never know what to expect, and honestly each year is really different.

This year some of the salmon streams in the Great Bear Rainforest were impacted by lower than usual number of salmon.  This was not just caused by a lower number of fish in the salmon run, but also due to the fact that they have had very little rain to fill the streams so that the salmon can get up them.  I think it had almost been one month without any rainfall on one particular place that we visited, according to the First Nation Guide.  Therefore it seemed like this year we had to work a little harder to see the wildlife and to photograph it. 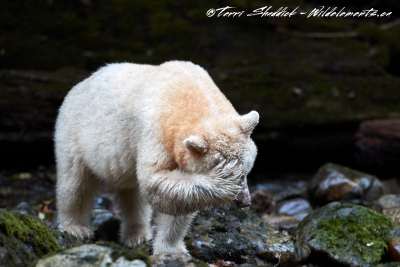 We were treated to a wide variety of wildlife, from Grizzly Bears, Black Bears, a Spirit Bear, Humpback Whales, Bald Eagles, Mink, River Otters, Harbor Seals and even saw TWO Sea Otters.  Some of the highlights of the trip were when we waited along a river for quite some time without really seeing anything, and then just before we were about to leave a Spirit Bear appeared…this is a good reminder of why you should “tough it out”.

We also had the opportunity to spend over 45 minutes watching two young grizzlies, which we assumed were siblings, wrestling in the water.  We actually left them and they were still going at it.  We went to “check out” a bay to see if there was any activity, and there were over 18 Bald Eagles in the water itself, with a bunch more white heads dotting the trees next to the bay.  And then when we went in the zodiac to check it out, we spotted a Grizzly along the shore.

Finally, we topped the trip off by seeing two sea otters.  It was awesome because one was really quite far north, and further north than the skipper had ever seen.  The second one was super accommodating and provided us ample opportunity to get some really great images while she cleaned her fur.

We came away with some really unique experiences and I am already looking forward to going back again next year.

Our 2020 trip dates will be released a the beginning of next year, if you would like to get your name on the priority booking list, contact me at contact@wildelements.ca for more information.