09 May Autofocus on Canon EOS R

had the opportunity to use my mother’s dog to put the autofocus on the EOS R to the test. And it would not be an understatement to say that it was a real test of the AF system. 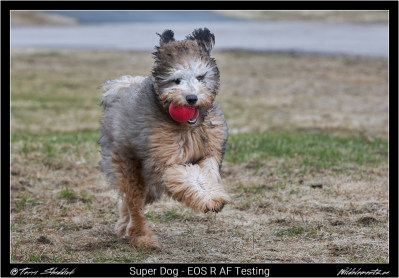 I have been extremely happy with the speed of autofocus acquisition on the EOS R.  I find that it locks on focus quite quickly, especially on more stationary or slow-moving subjects, and the number of photos in focus when shooting non-moving (or slow moving) subjects is quite high.

When testing the predicative abilities of the autofocus of the EOS R, using a dog running straight towards me, I noticed that the focus was not really up to the task.  It would get focus quite quickly, however it wasn’t fast enough to continuously re-focus as the puppy got closer.  While the first image was usually in focus, only sometimes was the second image, and very rarely was the third image.  The slow frame-rate of the camera was also noticeable in this scenario, because the number of shots taken while the dog was running at me was quite a bit lower than the 5D Mark IV.

If you are headed into a scenario where you are going to continuously have something running towards you, or driving directly towards you, such as any kind of race, then I do not think that the EOS R would be my top choice of a camera to take.

I also tested the autofocus while panning with the dog running right to left (or left to right), and I found that the autofocus was quite a bit more stable and held focus significantly better than when the dog was running straight towards me.  I would not hesitate to use the camera when in a scenario that I am planning to do a lot of panning.

I will admit, the dog was moving quite a bit faster than most wildlife subjects that I have photographed in the past, so while the EOS R has room for improvement, it is one of those situations that you probably would only notice one percent of the time, not in every day use, or at least not in the situations that I typically photograph.

I also did some testing on the AF Methods (area mode options) during the testing, so stay tuned to my future blog post on my thoughts on the various options.

If you have any questions, feel free to send me an email at contact@widlelements.ca.